“The aim of the method is a person that is organised to move with a minimum effort and a maximum efficiëncy, not through muscular strength, but through increased consciousness of how movement works”

He studied in Paris and obtained his Doctorate in Applied Physics. It was in the thirties of the last century that he developed his method. A knee injury with uncertain prospects regarding the results of surgery, made Feldenkrais began a lifetime of exploring and developing the relationship between movement and consciousness. In the fifties he returned to Tel Aviv, Israel where he lived and worked until his death.

During the development of his method, Feldenkrais also included to his studies: judo, jiu jitsu, anatomy, physiology, science of movement, evolution, psychology, and he immersed himself in martial arts.

Feldenkrais wrote a number of books on ways of learning, human consciousness and somatic experience. In the sixties, seventies and eighties he taught in Israel, many countries in Europe and in North America. In the early seventies, he led the first teachers in Tel Aviv, followed by two groups in the USA (San Francisco, California, and a group in Amhurst, Massachusetts). 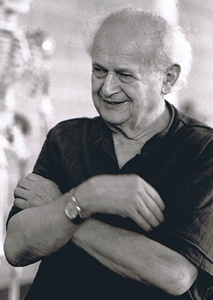 During the years Feldenkrais developed his method, he worked with a wide range of learning processes for different fields and complaints of children with cerebral palsy to musicians (Yehudi Menuhin). People who noticed that their awareness improved and physical their physical complaints became less when Feldenkrais shared his learning process.

Read more about the Feldenkrais method in this menu. You need inspiration? Every month the les schedule, links or updates of my classes. Register here for my newsletter.